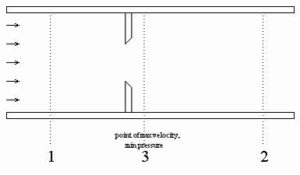 Several sensors rely on the pressure drop or head occurring as a fluid flows by a resistance.  The relationship between flow rate and pressure difference is determined by the Bernoulli equation.

where f represents the total friction loss that is usually assumed negligible.

The meter coefficient, Cmeter, is for all non-idealities, including friction losses, and depends on the type of meter, the ratio of cross sectional areas and the Reynolds number.  The compressibility factor, Y, accounts for the expansion of compressible gases; it is 1.0 for incompressible fluids.  These two factors can be estimated through calibration.

When the process is operating, the meter parameters are fixed, and the pressure difference is measured.  Then, the flow can be calculated from the meter equation, using the appropriate values for Cmeter and Y.  All constants are combined, leading to the above relationship.

The change in cross-sectional area in the venturi tube causes a pressure change between the convergent section and the throat, and the flow rate can be determined from this pressure drop.  Although more expensive that an orifice plate; the venturi tube introduces substantially lower non-recoverable pressure drops 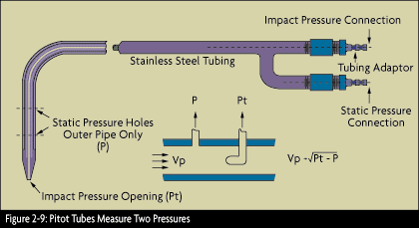 1.A differential pressure exists when a flowing fluid changes direction due to a pipe turn or elbow.

2.The pressure difference results from the centrifugal force.

3.Since pipe elbows exist in plants, the cost for these meters is very low.

4.The accuracy is very poor; there are only applied when reproducibility is sufficient and other flow measurements would be very costly.

1.A flow nozzle consists of a restriction with an elliptical contour approach section that terminates in a cylindrical throat section.

3.Flow nozzles provide an intermediate pressure drop between orifice plates and venturi tubes; also, they are applicable to some slurry systems. 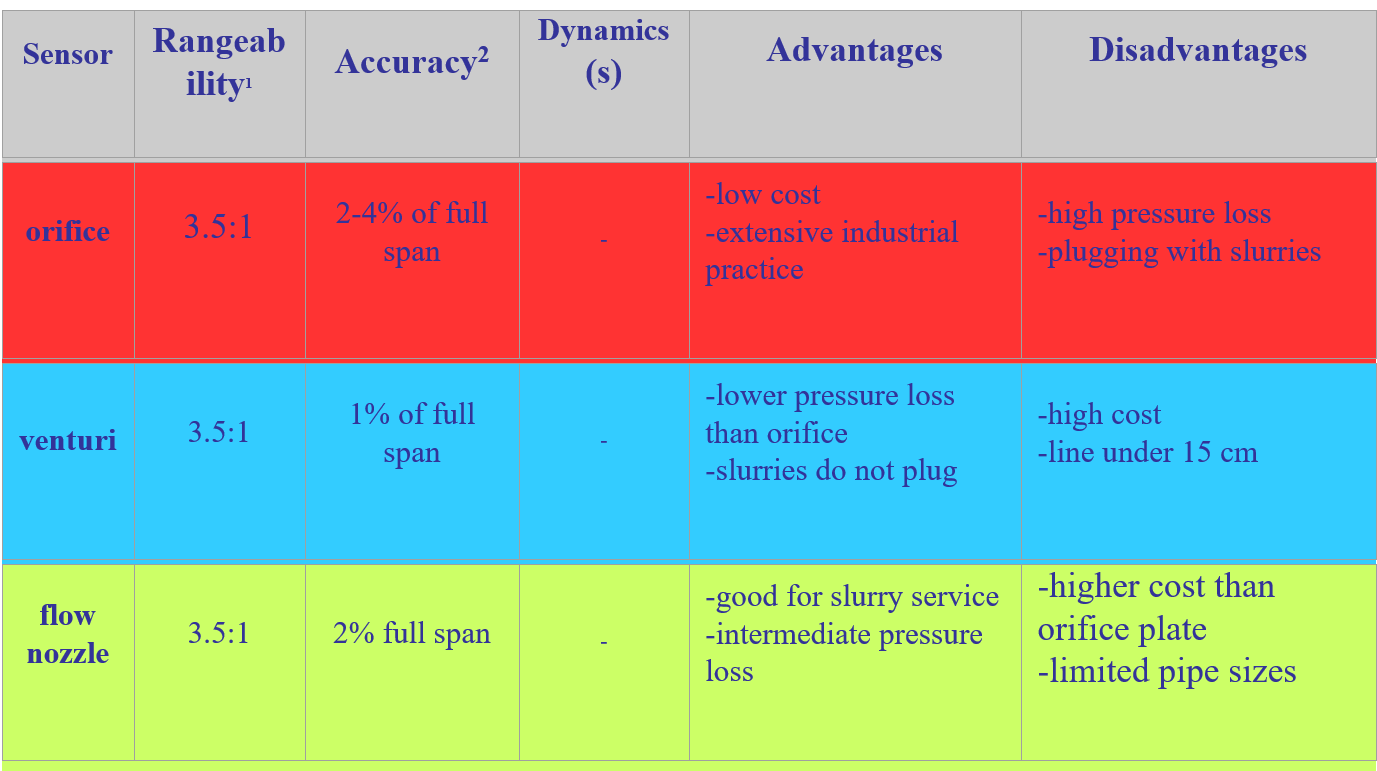 1.When the fluid flows past a bluff body in the measuring tube, vortices are alternately formed on each side of this body.

2.The frequency of vortex shedding down each side of the bluff body is directly proportional to mean flow velocity and to volume flow.

3.As they shed in the downstream flow, each of the alternating vortices creates a local low pressure area in the measuring tube.

1.This is detected by a sensor, such as capacitive sensor and fed to the electronic processor as a primary, digitized, linear signal.

2.Capacitive sensors with integrated temperature measurement can directly register the mass flow of saturated steam as well, for example.

Non-contact measurement from outside. Ideal for measuring highly aggressive liquids or fluids under high pressure advantage.

Imagine a fluid flowing (at Velocity V) in a Rotating Elastic tube as shown Below. The fluid will deflect the tube. 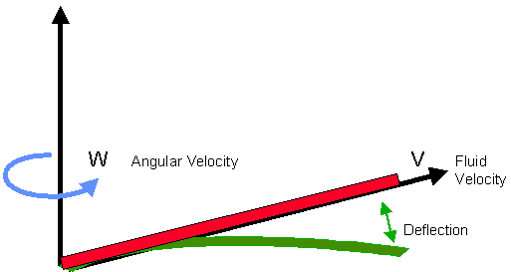 Considering A Mass M Moving from the center to the edge of a rotating Plate. This Mass M will take Path B as shown.

Accuracy – Accuracy is the degree of conformity of the measured value with the accepted standard or ideal value, which we can take as the true physical variable.

Accuracy is usually reported as a range of maximum inaccuracy.  These ranges should have a significance level, such as 95% of the measurements will be within the inaccuracy range.

Orifice flow meters with accuracy of ±3% of maximum flow range.

Repeatability – The closeness of agreement among a number of consecutive measurements of the same variable (value) under the same operating conditions, approaching in the same direction.

Reproducibility – The closeness of agreement among a number of consecutive measurements of the same variable (value) under the same operating conditions over a period of time, approaching from both directions.  This is usually expressed as non-reproducibility as a percentage of range (span).

Often, an important balance is between accuracy and reproducibility, with the proper choice depending on each process application.

Linearity – This is the closeness to a straight line of the relationship between the true process variable and the measurement.Lack of linearity does not necessarily degrade sensor performance.  If the nonlinearity can be modeled and an appropriate correction applied to the measurement before it is used for monitoring and control, the effect of the non-linearity can be eliminated.

Linearity is usually reported as non-linearity, which is the maximum of the deviation between the calibration curve and a straight line positioned so that the maximum deviation is minimized.

Reliability – Reliability is the probability that a device will adequately perform (as specified) for a period of time under specified operating conditions.  Some sensors are required for safety or product quality, and therefore, they should be very reliable.  Reliability is affected by maintenance and consistency with process environment.

Range/Span – Most sensors have a limited range over which a process variable can be measured, defined by the lower and upper range values.  Usually, the larger the range, the poorer the accuracy, and reproducibility.  Therefore, engineers select the smallest range that satisfies the process requirements.

Rangeability is the ratio of full span to smallest flow that can be measured with sufficient accuracy. If a chemical reactor typically operates at 300 °C, the engineer might select a range of 250-350 °C. Since the reactor will be started up from ambient temperature occasionally, an additional sensor should be provided with a range of -50 to 400 °C.

Dynamics – The use of the sensor dictates the allowable delay in the sensor response.  When the measured value is used for control, sensor delays should be minimized, while sensors used for monitoring longer-term trends can have some delay.

Safety – The sensor and transmitter often require electrical power.  Since the sensor is located at the process equipment, the environment could contain flammable gases, which could explode when a spark occurs.

Maintenance – Sensors require occasional testing and replacement of selected components that can wear.  Engineers must know the maintenance requirements so that they can provide adequate spare parts and personnel time.  Naturally, the maintenance costs must be included in the economic analysis of a design.

Cost – Engineers must always consider cost when making design and operations decisions.  Sensors involve costs and when selected properly, provide benefits.  These must be quantified and a profitability analysis performed. Remember that the total cost includes costs of transmission (wiring around the plant), installation, documentation, plant operations, and maintenance over the life of the sensor.